The 4 Main Karate Styles and Their Differences

Many distinct martial arts may be found worldwide, each with its own set of rules. Within such arts, there can be more variants, for example, the several forms of Kung Fu or the various types of Thai “muay” skills, to name a few examples (muay Thai, muay boran, etc.). There are four basic types of training within this art.

Among the most popular karate styles are Goju-Ryu, Shotokan-Ryu, Wado-Ryu, and Shito-Ryu, to name a few. In some manner, each form can be traced back to the karate system developed by Gichin Funakoshi. Each has its unique set of techniques that are highly influenced by the fundamental principles of karate as a whole. However, they provide opportunities for each style to differentiate itself and establish itself as a primary style of karate while also demonstrating the contrasts. 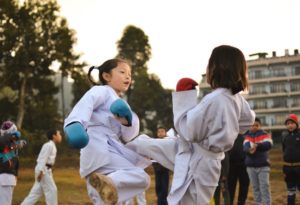 Even though karate originally acquired popularity in the 17th century, it is still a widely practiced martial art all over the United States particularly in Las Vegas. While karate does not use artificial weapons, it does stress the discipline and control of one’s own body as weapons. When pupils learn self-defense, they will be better prepared to defend themselves against any aggressor who may attack them unexpectedly on the street or anywhere due to a variety of conditions, including robbery attempts or other malicious motives such as stalking, for example.

Karate is more vital now than ever before. It’s more than simply a game: it’s a fun approach to develop self-discipline while still having a good time doing it! You may choose from various methods depending on whether you’re searching for psychological or physical growth.

Shotokan is widely regarded as the “grandfather” of karate systems – and many feel it had a major impact on the development of early taekwondo techniques. Shotokan karate was the first kind of karate to be taught to anybody who expressed an interest in learning it. Before the spread of Shotokan karate in Japan and Okinawa, karate training could only be obtained by a small number of students.

Shotokan karate’s creator, the famous Gichin Funakoshi, brought about a sea shift in the art. He was born in Okinawa in 1868 and was one of the select few who could learn under karate masters Itosu and Azato.

A school teacher by trade, Funakoshi made the bold decision to introduce karate instruction into Okinawa’s public schools, breaking with centuries of karate history in the process. After being asked to participate in the presentation by the Japanese Ministry of Education, Funakoshi shared his form of karate with the audience.

Funakoshi’s demonstration must have been affective since so many people were queuing up to train with him that he chose to stay in Japan. He established a dojo in the area, and Shotokan karate has remained one of the most widely practiced karate systems in the world to this day.

To distinguish Shotokan karate from other styles of martial arts (kata), it employs long, deep stances in its forms (kata), as well as a more dynamic sparring aspect (Kumite). In contrast to the deep perspectives of the forms, which are intended to equip learners with powerful legs, balance, and stability, sparring training is intended to create a more fluid type of applied fighting technique that may be employed in real-world scenarios.

Gojo-Ryu is a karate style that dates back to the 1920s. Chojun Miyagi created it, and he is perhaps most recognized today for being the inspiration for the character of Mr. Miyagi in the film Karate Kid. Many Okinawan karate practitioners, including the “genuine” Miyagi, were greatly influenced by Chinese martial arts.

This Chinese influence may be seen in Gojo-Ryu’s physical abilities and the ideology that guides the practice. The term “Goju” conveys a great deal about this particular form of karate. “Go” denotes anything firm and sturdy, whereas “Ju” denotes something soft and yielding.

Goju-Ryu karate methods are distinguished by a surrendering defense followed by a forceful and unyielding offensive that is uncompromising. Techniques like breathing and circular blocks that return as deadly strikes are stressed in the classes.

Kyokushin karate is one of the most well-known styles of karate practiced today. It was formed in 1964 by the Oyama Masutatsu, often known as “Mas Oyama.” It has been in operation since. Mas was born in Korea, which was then under Japanese occupation. Some of his time was also spent in China before obtaining full Japanese citizenship later in life.

Mas had a strong background in Chinese martial arts and other karate schools, having trained for two years with Gichin Funakoshi, the creator of Shotokan karate. It is reasonable to infer that Mas selected the absolute finest techniques from his past training to develop the curriculum for his Kyokushin style of martial arts instruction.

Perhaps this explains why many people consider Kyokushin the most efficient karate style for self-defense and application in mixed martial arts (MMA). George St. Pierre, widely regarded as the greatest mixed martial artist of all time, has been a student of Kyokushin karate for much of his life.

However, Kyokushin karate emphasizes full-contact sparring only with techniques that are permitted under the rules. Kyokushin karate does not allow for grappling, strikes to the head, low kicks, or clinch combat, among other things.

This is one of the most widely practiced karate systems in the world. Hironori Otsuka founded it. As a young judoka (a Japanese grappling martial art) student, Otsuka learned under Shotokan founder Gichin Funakoshi, who would later become his teacher. According to all accounts, Otsuka was an enthusiastic student of all karate systems who traveled the world to train with many of the world’s greatest teachers of his day.

Wado-Ryu karate continues to be the kind of karate that has been most significantly inspired by jujutsu, emphasizing joint locks and throwing techniques in addition to more traditional karate striking methods.